If you're reading this, it's because you either knew my wife or know me, which means, at least in some way, you know her.  That being the case, you've been made a better person.  Not by me, but by Tabby.  There are all different types of people in the world.  Selfish, selfless, kind or mean, but only the rarest of people make you better simply by virtue of having known them.  They are the type of people who make you proud of yourself, who give you a warm feeling whenever you enter their presence, whose laugh can brighten an otherwise dismal day.  Tabby was such a person.

If you never had the pleasure of meeting her in person, I grieve for you.  You never got to experience her laugh, her smile, her passion.  You never got to be hugged by her (and let me just say that even at the end, she was one of the best huggers on the planet).  You never got to feel was it was like to have your soul fed with love in the way that only she could.  Her friends were lifelong, and fiercely loyal, and for good reason.

Tabby never turned anyone away.  Never.  Misfits as, I'm sure, we all were when we met her, she greeted us all with a smile and a warm hug and treated us all as family.  Everyone, celebrities and normal people alike, remembered her.  Everyone loved her.

If you came to our house, there were always a few things you could depend on.  First, no one ever went away from our house hungry.  We might've not had much, but Tabby loved to cook and would cook up a storm for anyone who had emptiness in their tummies.  When we married, I weighed 142 pounds soaking wet and had 6% body fat.  I like to blame my weight gain on her cooking, but it was more than that.  It was contentment.  It was love.  It was comfort.

I tell the story often, to anyone who will listen, but I'm telling it again.  I first met Tabby in Junior High School.  I was dating her best friend at the time.  I lost track of her for about a decade, but found her again in Junior College.  I asked her out, and she turned me down flat.  At the time, she had a boyfriend.  It took me a whole year to get up the nerve to ask her out again, and that time she said yes.  Our first date was on Halloween, 1992.  I dressed as a drag queen (I make an ugly woman), she as a (beautiful) rodeo queen.  We were never apart after that.  By Thanksgiving of that same year, I'd asked her to marry me.  By Christmas, we told her parents, and by April, we were married.  Less than six months after our first date together, we were married.  And despite what many thought, we stood the test of time.  Twenty years we had.  Were they all great?  I'd be lying if I said they were.  But I would not change a single moment.  I wouldn't rewrite a single second.  Not one.  Not those times.

She is survived by our beautiful daughters, Anna and Zoe, her brothers Cameron and Aaron, her mom and dad Ruth and Don, her sister Althea, and by me.  To say that we are all devastated is an understatement.  To say that I will never fully recover would be laughable, were it not so true.

Whatever your faith, chances are you have some idea of an afterlife.  For Christians, it's Heaven.  For Pagans, it's Summerland.  Some call it Elysium, and others call it by names that do not fall easily from the lips.  No matter what your belief, wherever Tabatha is, it is paradise.  Not because our religion says so, or because of some prejudiced idea of where she would go, but simply by virtue of her being there.  No matter where she is, just because she is there, it becomes paradise.  She did it here on Earth.  I have no reason to believe she'd do otherwise elsewhere.

Goodnight, Tabby.  I love you so very much.  I do not grieve for you, but for myself and for the rest of us who are left behind.  There is a great hole in my life where you were, an empty chair at my table.  I will not get over you.  I will always miss you.  And I envy those who you meet in the afterlife.  Even they will be made better people for having known you. 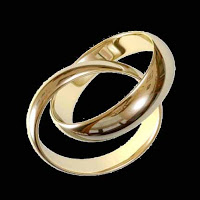 Today is a very special day for me, made even more so by recent circumstances.  Twenty years ago today, I stood in front of a crowd of friends and family and waited until the most beautiful, wonderful woman I've ever known in my life walked down the aisle, took my hand, and said "I do."  Twenty years.  Tabatha has made my life wonderful, made me a better person, and has been my inspiration for twenty years.

Think about that number for a moment.  Think about how many people my age (and no, I'm not telling how old I am) that get to say they found the true love of their lives, and stayed together for twenty years.  Not many.  Not many at all.

Through ups and downs, hard times and good times, and health and sickness, Tabby and I have stuck together.  I would never rewrite a single moment.  Not one.  Every moment with her is precious to me.

For everyone else, I leave you with a few photos of us, taken at various times during our life together.  Hope you like them. 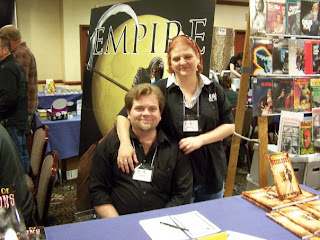 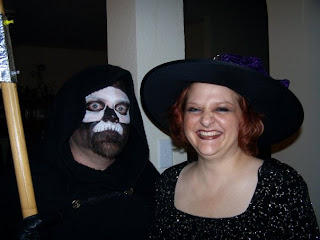 Halloween a few years ago.  The reaper and the witch. 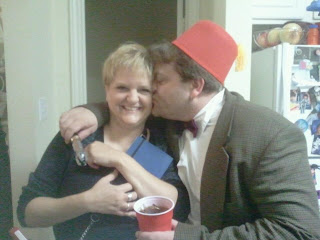 River and The Doctor.  Where would the Doctor be without his wife? 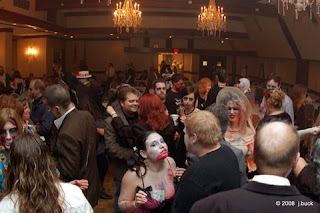 I know it's tough to see, but that shock of red hair is my lovely Tabby, dancing with me among a horde of zombies.  Actually, it's quite an appropriate image for our whole relationship.  To us, the world could burn and go to hell, so long as we had each other.

May you all find your lifelong love, and may you have a lifetime of happiness.

A Break from the Gloom and Doom 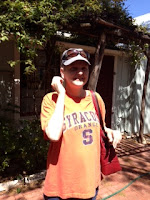 I know the posts have been a bit... dark lately.  There's good reason behind that, but that's not all there is to our lives.  Tabby isn't gone yet, and we still manage to get out and have some fun occasionally.  So, to that end, I wanted to post a few pictures of my gal.  Tabby's sister (Althea), her husband (Vincent), and their kids (Hallie and Kaia) came for a visit, along with Tabby's mom (Ruth).  We decided that being cooped up in the house wasn't a good idea, so we went to Greune (pronounced "green."  Don't ask).  We managed to get there just in time for "Market Days," which a chaotic mix of local artisans, great food, and live music.  I just wanted to give a little joy with some photos we took from the day. 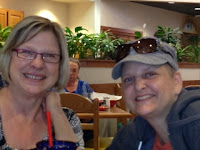 So here's Ruth (Tabby's Mom) with Tabby in Mamacita's restaurant. 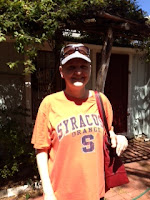 And here's Tabby enjoying some sunlight. 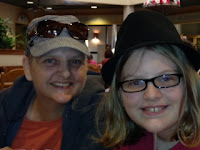 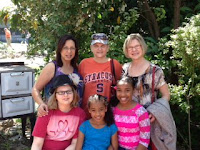 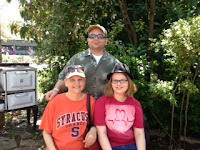 Tabby and Zoe, and some random weirdo who happened to be passing by... 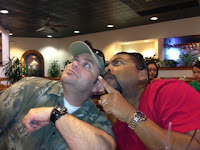 Me with my brother-in-law, Vincent.  I swear, there was something interesting up there.  No really... 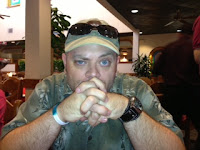 And me, with the look I usually have on my face.

So, there.  We enjoyed being out of the house.  Tabby was able to walk around for a couple of hours, then had to go home.  She was wiped out for the rest of the day (and most of the next one), but it was good to see her smile and laugh.

So let this post be a warm fuzzy to you all.

Posted by Scott A. Johnson at 2:15 PM 9 comments: Links to this post